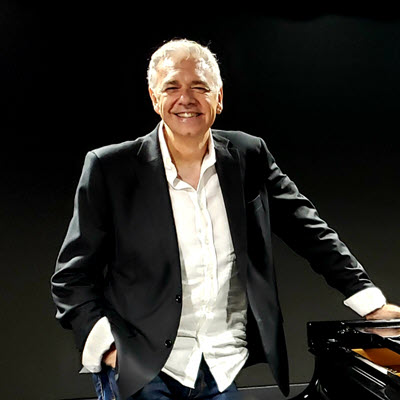 Co-Founder and Director of Learning Department

Angelo Molino has had music coursing through his veins since birth. His late father, Mario Molino (1929-2000) was a famous Italian guitarist and composer, who co-authored the Maestro Nino Rota, which appeared in the composition of memorable movie soundtracks like “The Godfather” and “Romeo and Juliet.” Angelo’s mother, Marcella Rufini (1931-2017), was also renowned in her own right as an actress and singer who appeared in many famous Italian films and television shows.

Growing up in an environment rich with art and music, Angelo chose to study music and soon after graduated with a degree in piano and composition from the State Conservatory of Santa Cecilia in Rome. He then became a professional concert pianist in the London Philharmonic Orchestra. Angelo has since gone on to have a successful musical career where he has performed in concert tours all over Europe and in the United States.

Angelo is also an early childhood music educator and professor, and his passion for using his musical gift to help children has become the mission of his life and his true calling. He has studied extensively to treat patients with special needs through the art of music and holds the prestigious European certification in music therapy. Over the course of 8 years, he has treated hundreds of people as a certified music therapist and is the author of Introduction to Music Therapy: A look on The World of The Sounds that Heal. He is also a consultant and teacher at the Parkinson’s Center in Rome, Italy.

Angelo is also a firm believer in sustainable philanthropy and is the Co-Founder and Honorary Chairman of The International Music & Wellness Council, which offers free music therapy treatment to children and young adults who suffer from mental health disorders.

Angelo resides in Newport Beach and focuses his time on helping young adults and children thrive through the wonders of music and art.